The VP2410 is the first model of the new Protectli Vault Pro (VP) series. The Vault Pro series is characterized by implementation of newer technologies such as an Intel Quad Core J4125 CPU, DDR4 memory in a 4 port model, Intel I210/211 Ethernet NICs, M.2 SATA Storage, Display Port, USB C with Display Port, Micro USB console port, and support for M.2 PCIe WiFI modules. coreboot for the VP2410 has been implemented via UEFI rather than legacy BIOS method. The original coreboot menu only allowed selecting the Boot Device/Method or, in some cases, running a MemTest. The coreboot UEFI BIOS menu is more extensive and has different behavior than coreboot on other Protectli Vaults. The purpose of this article is to document the coreboot UEFI menu and describe the expected behavior.

Beginning with release v1.0.15 of coreboot for the VP2410, a Netbooting feature has been added to the BIOS. This feature allows the user to iPXE boot the Vault over the network to a default Protectli site, or to specify a site. For example, one could boot to the netboot.xyz server which hosts multiple Operating Systems (OS) at  https://boot.netboot.xyz. See example below.

In order to use the Network Boot feature:

If nothing is selected, the system will count down a few seconds and automatically netboot to the default Protectli Network Boot and Utilities page at: https://netboot.protectli.com/menu.ipxe

In order to specify a site:

Note that if a specified URL such as https://boot.netboot.xyz  is selected, it will not be saved across reboots. It will need to be manually entered if the Vault is rebooted.

In order to “get into” the BIOS, boot the system

Note: “0 MB RAM” is a only a visual bug. The operating system will see the RAM actually installed in the system.

In this example, there are several boot options. The options that are displayed demonstrate how the BIOS handles different boot options.

The “CentOS Linux” and “ubuntu” options are shown because previously, CentOS Linux was installed on the internal M.2 SATA drive and Ubuntu was installed on a 2.5” SATA drive that was connected to the internal connectors. These are the labels mentioned above that were automatically created during installation. The 2.5” SATA drive has been removed before booting so, the “ubuntu” label remains, but there is no entry for the physical drive. The “Protectli 480GB M.2” entry is for the physical drive that has CentOS Linux installed on it. Similarly, the USB drive that was used to install Ubuntu and CentOS Linux was removed, so it is not displayed in the list. There is eMMC on the unit, but since there is no OS installed with a bootable partition, it is not displayed in the list.

In order to boot from this menu, just select the desired option and hit ENTER.

Another option to select from the Main Menu is the “Boot Maintenance Manager”. 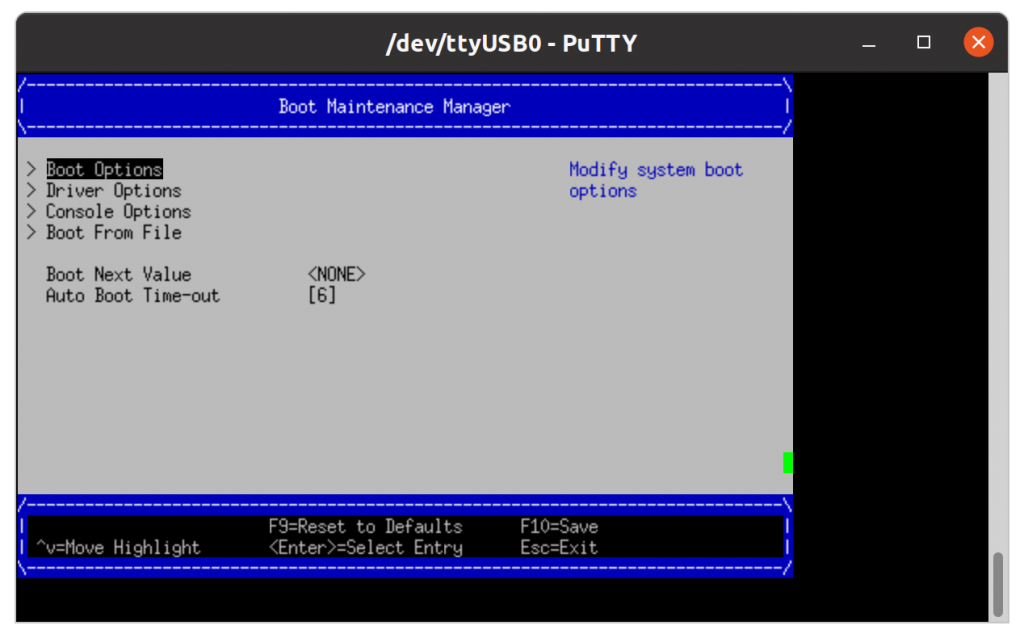 Note that the “Boot Maintenance Manager” and all the subsequent pages have keystroke instructions at the bottom of the page. Follow the on screen instructions to select the desired configuration. 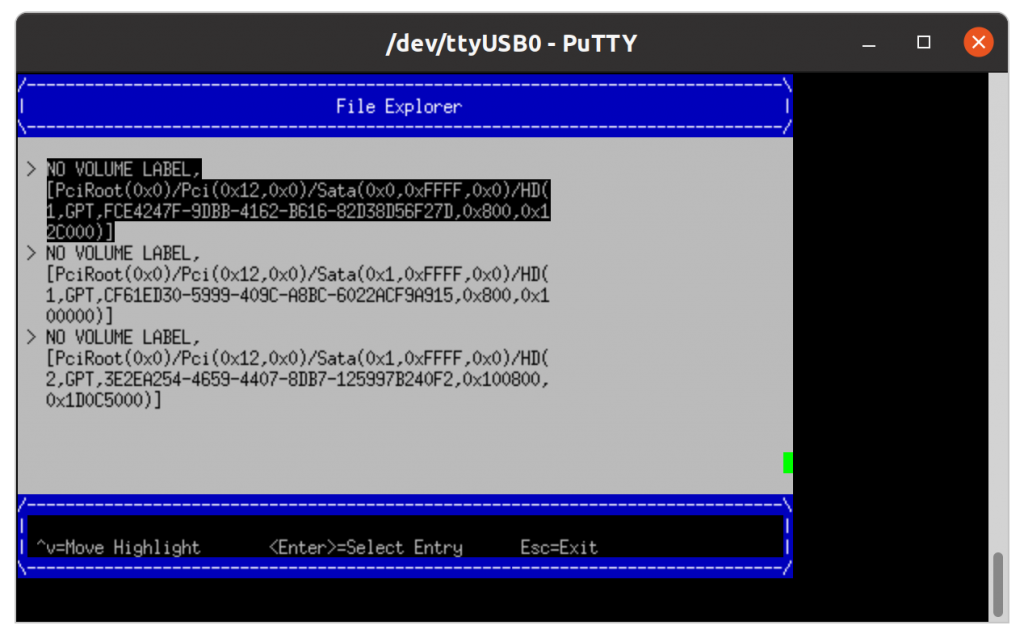 This allows one to select a file and then navigate through the filesystem to find the bootable file. This typically requires knowledge of the OS filesystem to identify the correct file.

The “Boot Next Value” sets the boot source for the next time the system boots, one time only, and overrides the default setting.

The “Add Boot Option” can add a boot option to the list.

The “Delete Boot Option” allows the user to manually remove boot options from the list.

Follow the on screen instructions to Delete a Boot Option

The “Change Boot Order” page allows the user to edit the boot order. 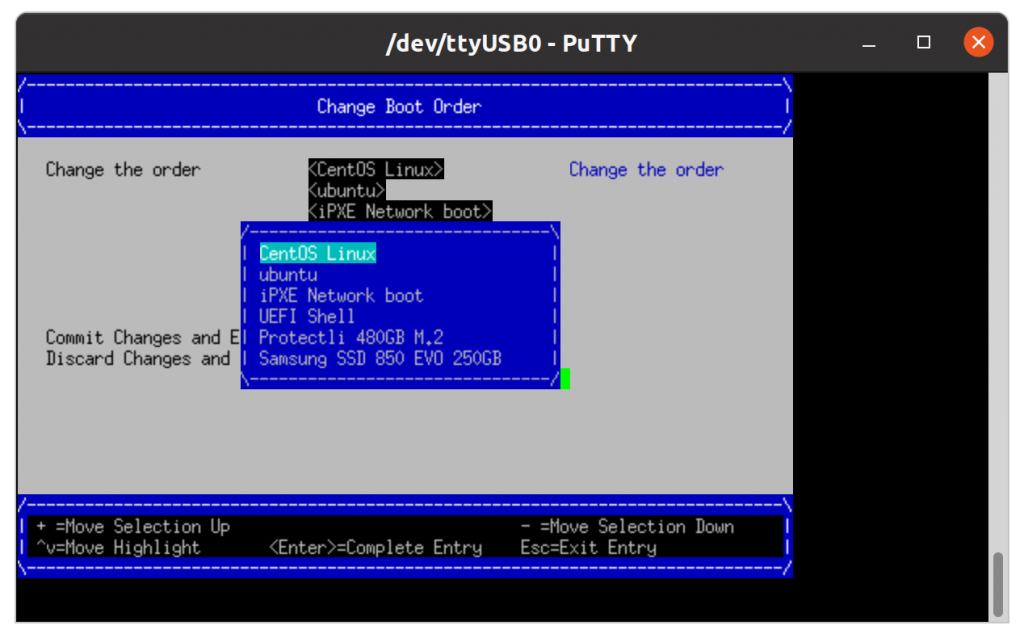 Flashing coreboot on the VP2410

Note: coreboot can be flashed on to the VP2410 at the time of order, or it can be flashed in the field. Flashing new firmware onto any hardware is potentially dangerous in that if the procedure is interrupted or otherwise not able to complete, your hardware may be rendered useless. Protectli strongly recommends selecting coreboot at the time of order. However, if coreboot is flashed in the field, proceed with caution only after fully understanding each step of the following instructions. If there are any questions, please contact Protectli support BEFORE proceeding.

The recommended procedure to flash coreboot to the VP2410, or any of the Vaults is to use the “Flashli” tool from Protectli found at:

Follow the instructions in the Knowledge Base article above to flash coreboot on the VP2410. Flashli can also be used to flash VP2410 back to AMI BIOS as well.

Manually flash coreboot on the VP2410

In addition to the Flashli tool, for those who prefer a more hands on approach, coreboot can be manually flashed on the VP2410.

There is a minor hardware change to the power circuitry of the VP2410 from the original lot such that it requires a new version of coreboot and flashing the new version to the original lot “bricks” the unit. The original lot can be identified by a S/N or MAC address of the first Ethernet port with the last 4 digits 0400 or less. Therefore we have not posted the newer version of coreboot for manual flashing due to this issue. However, you can use the “Flashli” tool as noted in the article above to flash coreboot to the VP2410. The Flashli tool will correctly identify the version of hardware and flash the correct version of coreboot. We have kept the instructions below for manual flashing. If you insist on manually flashing coreboot, please contact support@protectli.com for the correct coreboot file.

coreboot is flashed using a program called ‘flashrom’ which is available for many linux distributions. Protectli has validated  flashrom on Ubuntu 20.04. See this link for guidance on installing Ubuntu on the Vault. For the VP2410, be sure to select “UEFI” if prompted during the install. Also note that the default drive is likely to be “mmcblk” which is the onboard eMMC storage. Be sure to select a different drive such as the M.2 SATA if desired. The version of flashrom in Ubuntu 20.04 is not recent enough to support the VP2410. Therefore, flashrom source code must be pulled from GitHub and compiled on the VP2410. See the instructions below.

As noted above, the version of flashrom to support the VP2410 is not currently part of Ubuntu 20.04 distribution so it must be downloaded from GitHub and built.

In the instructions below, “#” indicates a command line instruction in an Ubuntu Terminal window. “filename” refers to the actual name of the file.

Flash coreboot on the VP2410

Flash the coreboot image to the system.

In this Knowledge Base article, we have given an introduction to the coreboot UEFI BIOS menu and showed how to flash coreboot on the VP2410.

As always, if you experience any issues, feel free to contact Protectli support at: support@protectli.com